OCTOBER 2014 - Heritage Capital Group is pleased to announce the successful closing of real estate financing for the acquisition of the land and building related to the Alhambra Theatre & Dining.  The Alhambra was built in 1967 and is the longest-running continuously operating dinner theater in the United States, and is one of the few remaining dinner theaters in the country. Iconic in Jacksonville, the Alhambra provides professional Broadway-style performances and a fine dining experience six days per week. The Alhambra was completely reinvented in 2009.

A nationally renowned Actor’s Equity theater, the Alhambra hosts actors who have been on Broadway, national tours as well well as TV and film. In the past, famed performers such as Dorothy Lamour, Martha Raye, Frank Gorshin and CydCharisse have all graced the Alhambra stage.  Betty Grable had her final stage appearance at the Alhambra.  In recent years, the Alhambra has hosted such notable actors as Michael Learned, Barry Williams, Loretta Swit, Sally Struthers and Jamie Farr and will host Debbie Gibson, Charles Shaughnessy and Lisa Welchel during its 2015 season.

Craig Smith, Managing Partner for Theater Partners, LLC, the parent company of the  Alhambra Theatre & Dining commented, “Securing the financing to buy the real estate was a defining step in our mission for the Alhambra to be one of the region’s most enduring and successful entertainment venues.  Heritage’s assistance was invaluable; they managed the process so I could maintain my focus on managing the business.”

Bill Prescott, a principal with Heritage Capital Group said, “We were able to use our relationships with several financial institutions that recognize Alhambra’s critical value to our community, and secured financing to meet the long-term goals of the Company.” BB&T provided the financing to fund the acquisition of the land and the Alhambra theatre building. 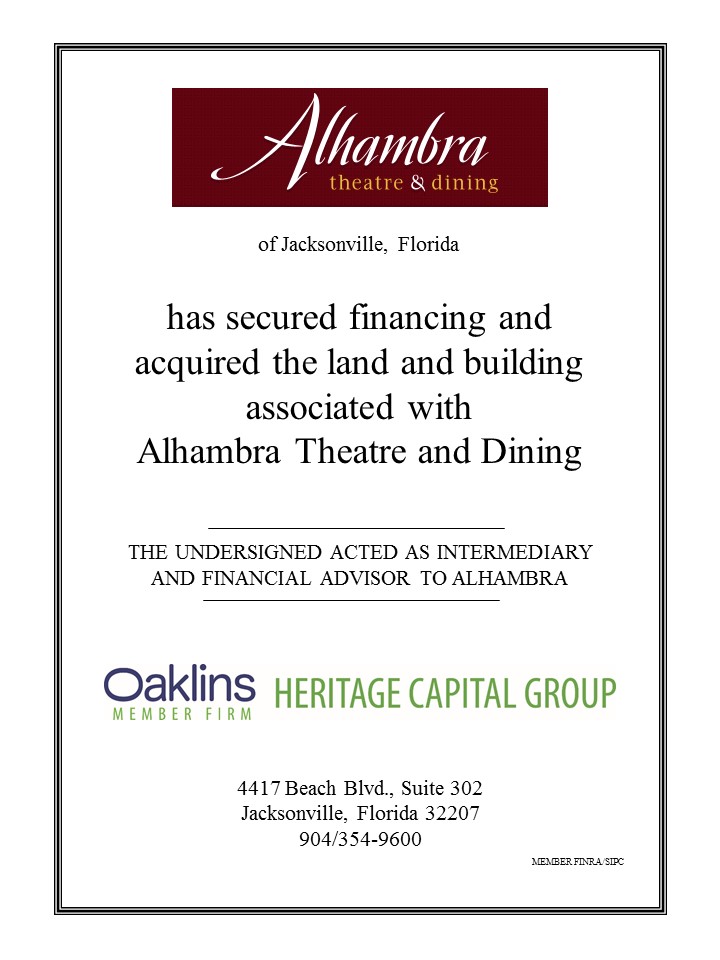