The Amelia Island Concours d'Elegance Has Been Acquired by Hagerty

Heritage Capital Group, Inc., an investment banking and financial advisory firm serving middle-market and emerging growth companies in the U.S. and worldwide, is pleased to announce that its client, The Amelia Island Concours d'Elegance ("The Concours"), has been acquired by Hagerty.

Businessman and car collector Bill Warner founded The Concours in 1996 with an attendance of about 2,200. Since then, The Concours has grown to draw an annual crowd of about 25,000 car enthusiasts and has evolved into four days of automotive activities such as classic car auctions and displays. In addition to its long-standing importance in the classic car community, The Concours has also significantly impacted local charities in northeast Florida by raising more than $4 million since it started.

"When I founded The Concours, I wanted to infuse the calm, traditional concours environment with the energy of motorsports. We achieved that and raised more than $4 million for charity along the way," said Warner, who will remain as Chairman Emeritus of the event. "In Hagerty, we have a passionate and highly-skilled team that will bring these themes to a larger audience."

Hagerty, an automotive enthusiast brand that offers integrated membership products and programs, aims to connect automotive enthusiasts across the globe with their Hagerty Drivers Club, which boasts over 650,000 active members. This club offers unique entertainment and has a portfolio of classic car events such as the Greenwich Concours d'Elegance, the California Mille, and the Concours d'Elegance of America.

"Our objective is to knit the enthusiast community together in a way that supports and protects the future of car culture," said McKeel Hagerty, CEO of Hagerty. "Amelia Island is synonymous with concours and motorsports heritage due to the steadfast efforts of Bill Warner and his team. We are incredibly proud to have the opportunity to build upon and scale Bill's vision."

"Having Heritage negotiate the challenges of a sale gave me great comfort and confidence that the best possible agreement between parties would be executed most professionally," remarked Warner. "The selling of a brand is very involved and complex, and it behooves anyone thinking of divesting their business to consider Heritage Capital to represent their interests. The details and legalities should be best left with those experts who deal every day in this genre." 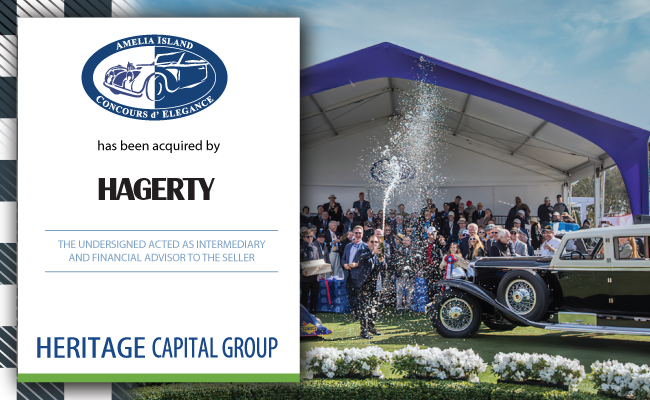